Buzz Review of ‘Are You Ready’ by Spectacle Theatre 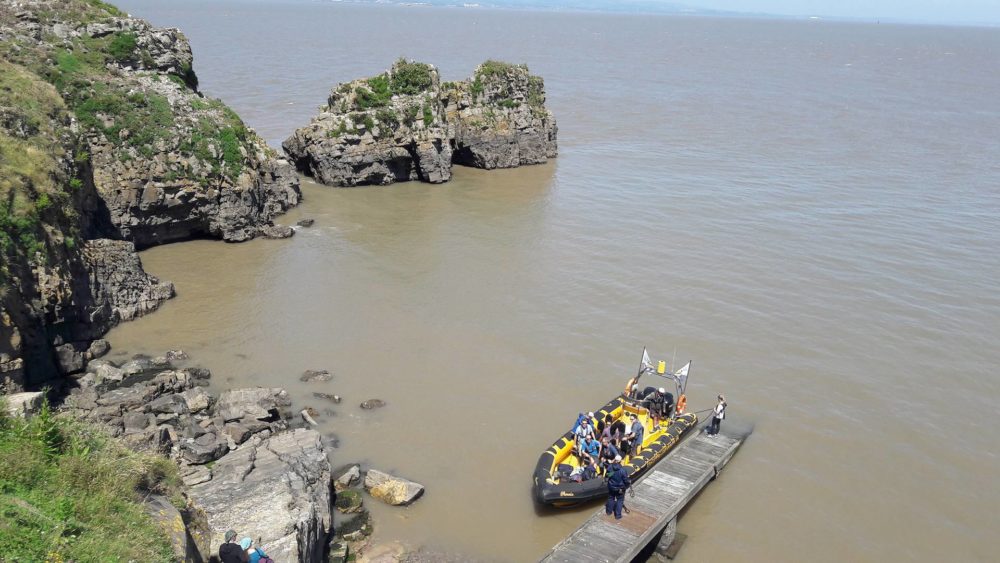 Stephen Springate travels to Flat Holm Island to find out more about its history with the help of a theatrical troupe to bring it all to life.

As everyone begins to gather on the pontoon at Mermaid Quay for the white-knuckle RIB boat trip over to Flat Holm, the drama seems to already have started. There are many frantic calls from the ringleader Steve, head of Spectacle Theatre and our hanky wearing guide for the day, to his missing actors, getting more and more desperate as it gets closer to departure time. No latecomers will be entertained lest we miss the tide and landing on the island becomes impossible. What follows is an awkward and uncomfortable tussle with the three unprepared technicians who have shown up to help meet and greet the audience as Steve badgers them into filling in for the missing actors.

The techies are certainly more eloquent than the average tech assistant you find behind most productions and it soon (presumably) seems to become apparent that this increasingly painful to watch exchange doesn’t mark the possible cancellation of the event, but is in fact the first act of the interactive theatre-cum-daytrip experience we’ve all signed up for. Either that or the technicians were magnificently well prepared for the itinerary of the trip.

With everything resolved, the audience dons their life jackets and we make our way across the bay to the barrage. With a short stop at the barrage for Steve to heckle some poor members of the public with his malfunctioning megaphone, we are off out onto the waves of the Bristol Channel and the rocky mounds of Flat Holm slowly looming up at us; an absolute highlight of the trip.

The small island halfway between Wales and England is home to a fascinating history starting with occupation in the Bronze Age, and has played parts including an Anglo-Saxon Christian retreat, a landing post in the Viking invasion of Wales, a quarantine zone for cholera ridden sailors, a Victorian gun battery and an anti-aircraft post during World War Two. Various pieces of the island’s ruined past intermingle today, and the tour manages to spectacularly bring some of these derelict husks back to life in a sympathetic and atmospheric manner carried out by Steve’s expert storytelling and his band of actors.

One of the most atmospheric experiences was gathering the audience round in a roofless shell of a cottage to read out a letter written by a World War Two solider detailing the daily grievances of life on the island. He makes references to his view out the window, making us realise we are stood in the exact same spot he wrote the letter 75 years ago, and mentions a song playing on the radio that never failed to raise morale throughout the posting. Without warning, the very song blares out of a hidden source, thrusting the audience straight back into that very brief snapshot of time currently being visited. We don’t have long to take this in though, before the air raid sirens go off and we are ushered out of the cottage and onto another area of the island.

Perhaps where the experience lacks is that between the location based performances there isn’t much more to the experience than a gentle amble from location to location; it currently feels like a brilliantly done guided tour with theatrical elements, but if the drama was kept up for the whole of the event then it would truly feel like an immersive theatre experience. However, when you’re in such a unique setting with spectacular panoramic views and a strong sense that you’re far removed from the mainland on all sides, it’s hard to find a reason why this is necessarily a bad thing.

Put on by Spectacle Theatre with help from the Unity Cymru theatre company, this experience provides a fantastic opportunity to see a fascinating location with an extremely fun boat ride there and back to boot. The tour has clearly been thoroughly researched and is passionately presented by Steve, who is a playful and engaging host who holds the audience’s attention from start to finish. Some of the various pieces put on by the actors throughout the islands various locations were nothing short of spine-tingling, and the free time given at the end to explore the island before the boats came to take us back was much appreciated. For those who have ever been curious to visit the island, there isn’t a better opportunity to take than this one.